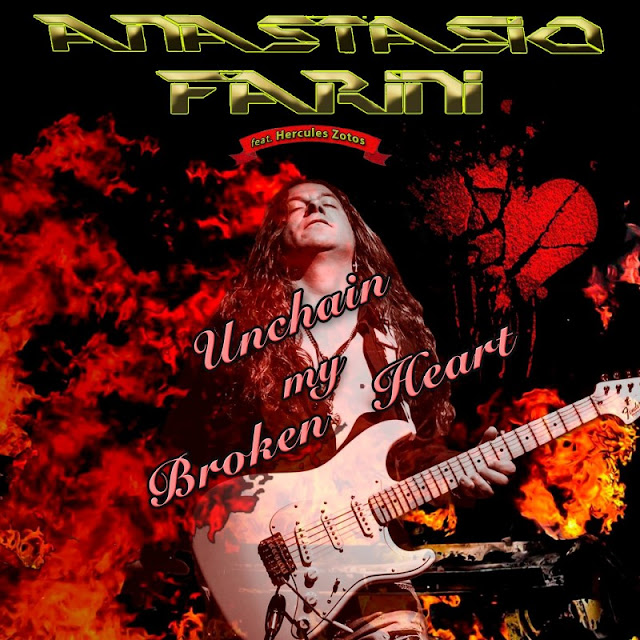 DEFOX RECORDS and HEART OF STEEL RECORDS are proud to announce the new single of ANASTASIO FARINI, great guitar virtuoso from Greece!
The song titled "Unchain My Broken Heart" (feat. Hercules Zotos) will be available on every digital worldwide webstores in March 10th, 2016!

Anastasio Farini was born in Thessaloniki (Greece).
In early age he started taking classical guitar lessons and completed his studies in music theory. His love towards rock'n'roll led him to start playing electric guitar and form his first band called White Rose.
Was sixteen years old, he play live gigs in several venues, gaining air play from radio stations and a recognition as an upcoming guitar talent through Greek Metal Hammer Magazine.

He have influences in guitar virtuoso like Yngwie Malmsteen, John Norum, Chris Impellitteri, Steve Vai,and many more, led him to create a more melodic personal playing and sound. Since then he has collaborated with many singers and bands as a member or as a session musician.

His debut album "Lil' Angel" with 9 melodic Hard Rock songs with elements of classic Hard Rock till Glam, and Hair Metal sounds with neoclassical solos have received more positive critics and reviews by the international media all over the world.
Also Anastasio Farini cooperated with the great singers (Reuben Archer, Dean Mess, Rob Mancini, Pelle Saether, Darren Grant, George Gakis) wherever they in turn gave them their own mark in the final result.

About the single "Unchain My Broken Heart" the vocal line are by the singer Hercules Zotos and very soon will be published the video clip on Youtube.

Produced by Anastasio Farini and Stratos Athanasiou at Stone studios and the video production are from "Orama productions".